The NSW Government announced in February 2015 that it had a preference to introduce a container deposit scheme (CDS). That announcement was endorsed by the opposition. So what is the State of Play beyond NSW?

So 5 out of 8 states/territories are seriously considering change.

The Federal Government has looked at the space and decided it was all a bit too hard and left it to the States.

MRA completed a study for the Local Government and Shires Association of NSW, which showed that local government and MRF’s would be better off under a CDS (so long as MRF operators could redeem deposits). You can read the original study here. The reason: even though 83% of eligible containers are redeemed outside of the kerbside system, the 10c redemption on each container left in the kerbside recycling bin is worth more than the value of the glass, plastic etc. as a raw material. So the value of the recycling bins’ contents increase under a CDS and that gain is shared by the industry and councils.

At this time, the NSW government has not proposed its preferred model for CDS. The packaging sector has proposed 880 Reverse Vending Machines (RVMs) to be spread across NSW.

That is not very many. So clearly this model is focussed on public place recovery of containers (and not as a replacement to kerbside recycling).

It is a very different model to that enunciated by local government and the Boomerang Alliance, which see a full container collection infrastructure built (via RVMs) across the state to replace most of the collection of containers via kerbside recycling.

It is of course possible to sequence both – to start with public place RVMs and gradually increase their abundance. The higher their density the more they will extract from kerbside bins. The scheme design issues yet to be clarified are:

Each of the above is subject to conjecture and debate. What we do know is that the NSW government has agreed to set up a technical advisory committee to review options.

It will spend time consulting with stakeholders before providing recommendations on final design to the NSW government.

This debate has been ongoing for 15 years, far too long in my view.

We need a system that is:

So worth doing? Yes.

But as one small step in a much longer journey, of creating a circular economy based upon economically sustainable and efficient, resource recovery. 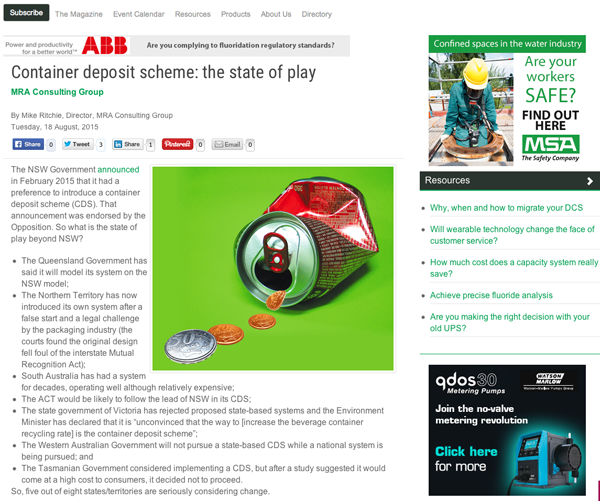 One thought on “Container Deposits Scheme – State of Play”