Australians use an estimated 5 billion single use plastic bags (supb’s) per year. Sounds like a lot but this represents only about 20,000 tonnes of plastic or 0.04% of the waste generated in Australia per year. If all of these plastic bags go to landfill they represent just 0.1% of waste to landfill. 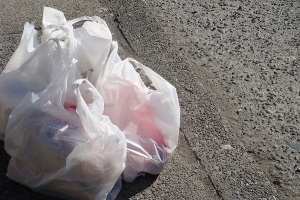 So supb’s are an important litter problem but they are by no means the most significant waste problem. This honour is held by organic waste (food, cardboard, timber, pallets etc) which represent around 50% of all waste to landfill in Australia.

As I’ve written previously, it is important we deal with supb’s for two reasons – their contribution to litter and pollution and as an iconic waste stream that generates community engagement.

But I hasten to add that the solution for supb’s is not an industry-wide collection and recycling program. Collecting supb’s for recycling is ridiculously expensive and a waste of money relative to other material streams. One trial by the Packaging Industry found that collecting and recycling plastic bags through those wheelie bins you see at the front entrance of shopping centres, cost $4,572/t. That compares to an average cost of $40/t for kerbside recycling.

The simplest solution is to limit their use in the economy in the first place by adding a price (or ban). I prefer a small charge as it has a lighter touch than an outright ban. Bans tend to be very black and white, there is no room for nuance nor for industry to adapt (unless the ban is foreshadowed in advance).

Back in 2008 I wrote a similar article for a national Environment Minister’s meeting. Not a lot has changed since then. A 10 cent price on supb’s was a no-brainer then, and is even more obvious now.

The United Kingdom has even shown us how effective it is. When Wales mandated a charge of 5p per bag in 2011 they observed a 76% decline in plastic bag use in the first year. Similar observations were made in Northern Ireland in 2013, Scotland in 2014, and England in 2016. According to the UK Marine Conservation Society’s Great British Beach Clean report, the levy contributed to a 40% reduction in the number of plastic bags found on UK beaches.

Further, since it is not a tax, retailers are expected to donate the funds to good causes. Tens of millions of pounds have been donated to community groups as a result. The levies are also popular. Wales reports that 74% of people support the charge after four years of implementation, up from 66% when it was introduced.

However plastic bags charges may be fiercely resisted

America has seen the roll-back of supb charges and bans. Most recently, the New York State Senate passed legislation to prohibit a bag charge that had been adopted by the New York City Council.

Invariably, the resistance to bag charges comes from a combination of wanting to avoid a patchwork quilt of regulation across and within States (fair point), and from a belief that business and consumers will bear an unnecessary cost. American regulators have also faced well-funded resistance from bag manufacturers arguing that a plastic bag charge or ban will cost business and disadvantage low income shoppers.

The answer for Australia is a national agreement on an supb charge applying in all States and requiring that the revenues raised are dedicated to community use.

As the UK experience demonstrates, a well-designed system leads to a large and rapid reduction in plastic bags usage and has the benefit of raising money for the community. It is also overwhelmingly popular.

My plea is that we get on with it so that we can turn politician’s attention to organic waste to landfill which a thousand times bigger in terms of total tonnes and has a greater impact on the environment via its contribution to methane emissions from landfill and climate change. 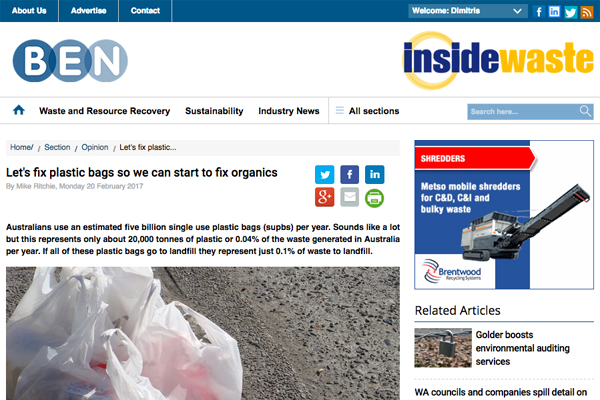